Hello everyone and welcome back to another post by Supercars By Putera! In this post, We will be reviewing not one but 2 supercars! Actually, we were in a long wait to review this classic model made by Ford but it now has received a newly refreshed modern looks, the legendary Ford Mustang 2016 2.3 litre Ecoboost 310 horsepower and the Ford Mustang GT V8 5.0 litre 415 horsepower! If you personally ask me, “Putera, does it worth the wait?” My answer, “Yes! It is worth the time waiting for not one model but 2 variant of this Ford Mustang!” Yes people, I have driven the Ford Mustang 5.0 GT variant as well! So, it is definitely worth the wait!!

I’m intrigued to know and drive just how good an American Muscle car would feel like by being behind the wheel? Just like the old models of Ford Mustang that we see in the Fast and Furious franchise, we can see that the Ford Mustang are being modified to boost its torque and enabling the car to do a front-wheels-up by pressing the accelerator pedal fully to the floor. I know it would cost a fortune to modify the car in such way but if you are a gear head, you would definitely do it.. The latest version of the Ford Mustang are being shown to the public for the first time is in the movie, Need For Speed. By having this insights from this 2 supercar-feast movies to the eyes, my eagerness and curiosity level to drive the muscle car increases. We all know what is a super-car right? Having a high horsepower engine, and streamlined body/chasis to help increase the movement of wind passes the car as fast as possible and giving the car low resistance from the wind as possible. So, what is a muscle car? or what is an American muscle car? A muscle car essentially is a high performance V8-based car made in America(which is proudly being referred as “American Muscle Car”) The brands and models referred as American muscle car is among others, Chevrolet Impala SS, Ford Torino GT, Ford Mustang GT, Buick GS and Dodge Charger R/T.  The models that is mentioned above is the most high performance that are being made straight from the factory are the ones considered as American Muscle Car. Why such discrimination to the lower ends of the models? Sadly, even I don’t have the answer to that question.

My review? Let’s start with the 2.3 Ecoboost variant first shall we?

At first glance, the body design of the latest Ford Mustang has a modern and sleek look. I’m astonished with how it looks even from afar especially when Ford fashion the car with bright and vivid paint colours. This pony badged supercar really is refined then its predecessors! The headlights and taillights are among the key components for us to identify from a distance that this is a new Ford Mustang! The big sprawling engine especially the GT 5.0 variant really fills the engine bay of the muscle car!

I know that you are here for this section right? Let’s start..

Once I received the keys to the muscle car, it is a dream come true. Like I mentioned above, I saw this car in Need For Speed movie, it excites me so much that I have the keys to legendary American Muscle Car here is Malaysia! Wow! My heart-pumps so vigorously at this point already let alone sitting in the car!

Upon entering the car, once I open the door, the smell!! Ouhhh, I do love a new car smell, this car in particular have the electronic-controlled bucket black leather seats that came with heat and cooling air out from the seats!! Essentially, you have an air-conditioner in the seat to warm you up or cool you down at a push of button.. Even you have the options to adjust the warmth and coolness of the air. How warm and how cool you want the air coming out from the bucket leather seats to be, it’s at your personalised preferences. Once I taken a few pictures, its time to sit in the car and feel the black leather that came all the way from USA. I am so hype at this moment.. Its a right hand-side vehicle so at the driver’s door, my left in the car, slowly and gently, I sat inside, followed by my right foot and closed the door. Again, the smell intensified! Wow! Its a great leather smell! The leather seats feels comfortable.. For a muscle car, I am sure that it is comfortable to make the car as your daily driving vehicle.. It fits for long distance journey too! So, immediately, in front of me, I can see the steering wheel with the pony as the emblem on it. The digital speedometer with lots of computer options to see the performance charts of the car, and with the settings to change the colour of the LED’s in the car. Wow! So many colours to choose from and the LED’s are not just running at the speedometer only, it further extends at the door handle as well.. We can control the settings of the speedometer at the steering wheel of the muscle car. That is only the speedometer part. Let’s move on with the centre console and entertainment of the muscle car.

Well, at this point, At the top right corner of the centre console is the start button of the muscle car. Wow, I amazed and blown away with the amount of buttons in the car. So many buttons to go through though! Wow!! The 4 main switches that give a different sensation to the driver of the muscle car at the centre console is the Steering Modes button, Drive Modes button, —

I am really excited for this moment. Upon observing all the details in the car, and having the keys in my hand, the urge to push the start buttons builds up very fast in me as I want to hear the engine come alive very badly.. So, after having quite a holding-in the rumbling feelings to push the start button, and finally, I did it.. Once I pushed the start button, the engine came alive well! The engine roaring to life and the exhaust sound made the experience quite amazing! Well, I have to say, it is not as loud as other supercars that I have driven and reviewed in this blog but considering it is a 2.3 Ecoboost engine variant, it is certainly a signature of a legendary Ford Mustang! So, now that I have hear the engine.. How about reposition the gear in ‘D’ shall we?

The drive was surprisingly smooth! Not so much of a drama like other supercars that I have driven and reviewed in the blog. Even for the GT V8 5.0 variant as well except GT V8 5.0 variant has a slightly louder engine sound than the 2.3 Ecoboost. The top speed for both of the models are 155 mph and 0 to 100 km/h in 5.5 seconds for the 2.3 Ecoboost and 4.8 seconds for the 5.0 V8 GT variant! Wow! I like the speed though!

Despite the specs sheet and the V8 engine, my overall experience after test driving the car would be it lacks the beast personalities in it.. To be honest, I have a high expectations for the car to blow my mind especially when driving it.. The buttons, the leather seats, the LEDs is great but I am seeking for that punch, that something extra that Ford came out to try and beat other supercar makers. Be it a big makeover in the performance or overall looks, I still perceive that the legendary Ford Mustang stands on its own. Ford came out with this specifications for a reason and I think it is impressive to see, great accessibility to features and functions of the car, overall good performance of engine and most importantly, a great new car to take on the name “Mustang” as its predecessor owns the name gloriously.

Before I end my write-up of the Ford Mustang 2.3L Ecoboost 2016 and Ford Mustang GT 5.0 V8 2016, I would like to thank you to the one and only, Moga Motors Sdn Bhd, Jalan Ampang, Kuala Lumpur, Malaysia specifically Mr Khairi Edin, Head Sales Consultant for letting me test drive an American Muscle Car. To all my loyal readers, thank you for your time by reading this post from the beginning until the end, I hope it will help you by giving the insights and how it feels like to drive it. Once again, thank you and have a wonderful day ahead! Before you go, have a look at the pictures below! 🙂 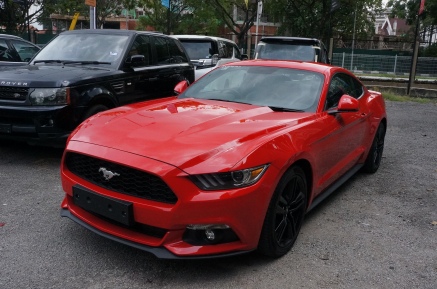 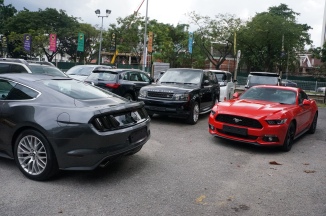 Follow this blog for continuous updates on supercars from your one and only, Supercars by Putera!

Interested to buy your dream car from us? or simply would like to know our competitive supercar prices? Go to contact me and fill in the form there. We will get back to you the soonest!

That will be all from us! This is Supercars By Putera, signing off! 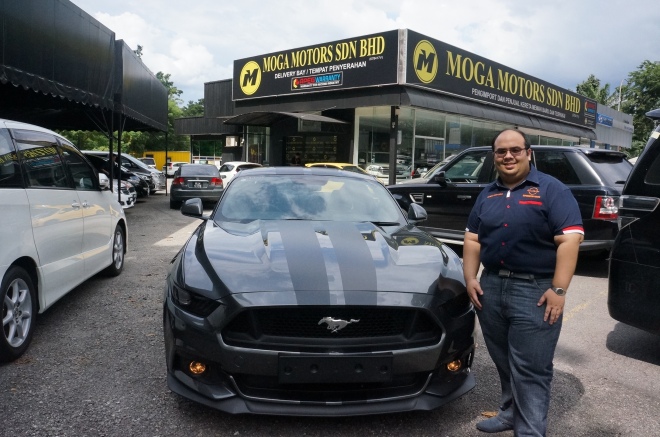